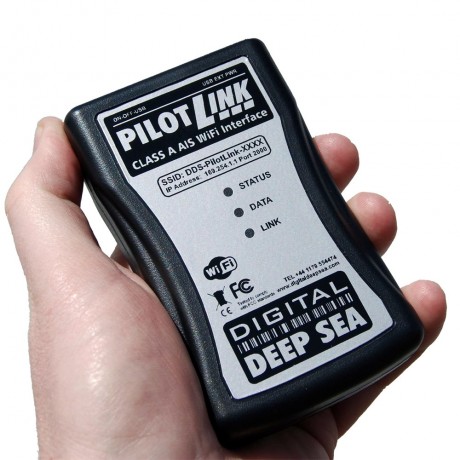 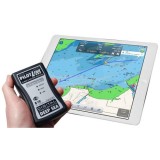 “Connects to the pilot plug interface of a Class A AIS Transponder so iPad, iPhones and other tablets can share the AIS data via a wifi link.”

PilotLINK is a wireless interface for Class A AIS Transponder. All Class A transponders share a common “Pilot Plug” connector that PilotLINK connects directly to via a 1m cable. PilotLINK then creates a wifi navigation network on board the vessel which allows AIS and GPS data from the Class A

to be sent directly to any connected mobile devices such as phones or tablets. It’s compatible with iOS and Android systems (depending upon app utilised) as well as PC & MAC based systems.

PilotLINK is stand alone and can operate from its internal, user replace-able, dry battery (PP3) for up to 15 hours. Alternatively, it can connect via a standard mini USB connector to any USB style power pack or AC/DC USB power adaptor that are readily available from many 3rd parties.

PilotLINK is compatible with a wide variety of apps and PC programs. iAIS is a free of charge app from Digital DeepSea which gives a basic AIS radar type display and target information. It’s also compatible with iSailor and iNavX – both popular charting/AIS products and many other 3rd party apps available through the Apple App store or Google Play on Android. PilotLINK can also interface with a PC or MAC. Popular navigation programs such as SmarterTrack, SeaPro, RosePoint and MaxSea for PCs or macENC for a Mac are all compatible. PilotLINK ships with a complimentary copy of SmarterTrack Lite – a full featured AIS display program for Windows PCs.