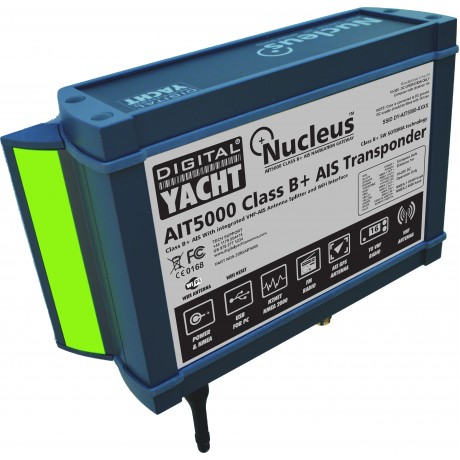 “The AIT5000 is a Class B+ AIS Transponder with a 5W power output, a Wi-Fi interface, a built-in VHF splitter and utilises SOTDMA format transmissions.”

Digital Yacht have introduced a new range of Class B+ AIS transponders.Class B+, a new standard, utilises SOTDMA format transmissions which offer a 5W power output (2.5x more powerful than a regular Class B), a guaranteed time slot for transmission in busy traffic areas and faster update rates depending upon the speed of the vessel. It’s ideal for ocean sailors requiring the best possible performance and future proof satellite tracking applications, fast power boats and smaller non-mandated commercial vessels. It still inter-operates with existing Class B and Class A systems.

The AIT5000 incorporates a patented ZeroLoss VHF-AIS antenna splitter allowing the main VHF antenna to be shared with VHF, AIS and FM radio. It also has a wireless interface for connecting to iPads, smartphones and tablets.

The AIS transmissions can be stopped with our AISConfig app and with a remote silence switch.

The AIT5000 has the option of an AIS SART alarm which is great for use with personal AIS MOB devices. Now works with the popular Navionics Boating App for Apple iOS and Android to display GPS and AIS data on your Navionics charts.

Class B+ is a new generation of AIS functionality based on SOTDMA (self organised TMDA) messaging rather than the simpler CSTDMA (carrier sense TDMA).  It guarantees your AIS transmission will get a time slot, even in areas of very high traffic density.  It also specifies a 5W transmission power (compared with 2W for Class B) and a transmission rate that increases as the vessel moves faster.  With regular Class B protocol, the transmission rate is fixed at every 30 seconds when the vessel is moving. It is ideal for ocean sailors requiring the best possible performance and future proof satellite tracking applications, fast power boats and smaller non-mandated commercial vessels.